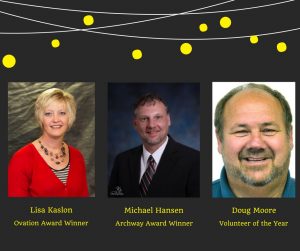 The Ovation Award for Outstanding Business or Professional Woman is presented to Lisa Kaslon by Ernst Auto/Ernst Toyota.

Lisa has worked for the University of Nebraska for more than two decades, advancing now to leading all youth development programs in northeast Nebraska as district 4-H coordinator since 2011.

Over the past 14 years, Lisa has brought nearly $3 million in grant funds to bear on youth development in the Columbus region. A large percentage of those funds have built and sustained the after-school program in Columbus that Lisa directed. This program has now reached more than 5,500 students.

Lisa has been a difference-maker in her profession across Nebraska. She developed and managed the 4-H online leader training site. She co-chaired the Youth Development Action Team, leading 95 staff in tackling action items in the Nebraska 4-H strategic plan. Lisa has been called to facilitate professional development events for Extension staff across the state and nation, and also for numerous other business and community organizations. That service has been recognized with the Meritorious Service Award from the National Association of Extension 4-H Agents and Platte County 4-H program in 2014. She was given the Outstanding Mentor Award by the Nebraska Cooperative Extension Association in 2015.

Lisa has invested herself in our community, as well. She is currently on the board of directors of the Columbus Area Chamber and Scotus Central Catholic. She has served Connect Columbus, Columbus Area United Way, St. Anthony, ESU 7, Child Care Task Force and multiple roles for the chamber of commerce.

The Archway Award for Outstanding Business or Professional Man is presented by Columbus Tire & Service to Michael Hansen.

Mike has been the president/CEO of Columbus Community Hospital since 2009.

Mike has 34 years of experience in health care. In eight years, Mike has led the team that has grown Columbus Community Hospital in physical space, in number of doctors and specialties, and in community impact manifested in projects such as the Columbus Wellness Center and CCH Child Care Center.

Mike has led Columbus Community Hospital to join a collaborative of three metro health systems and six rural independents in Nebraska called the Regional Provider Network. This has allowed the local hospital to stay independent in the world of hospital mergers and acquisitions.

Under Mike’s leadership, the hospital has been named a “top-performing hospital” by the Joint Commission and is the most affordable hospital in the state of Nebraska.

Gov. Pete Ricketts appointed Mike to the State Board of Health in 2016. He serves as the one designated hospital administrator on that board.

Mike has chaired the board of the Nebraska Hospital Association and served in other roles for the association. He is a past president of the Heartland Healthcare Executive Group. Mike previously served on the Columbus Area Chamber of Commerce Board and as a TeamMates mentor.

The Charles Farnham Volunteer of the Year Award is given by First Nebraska Bank to Doug Moore.

Doug is a Columbus native who has invested himself in his hometown in every way, both in his professional time and in the time he gives as a volunteer.

As an alumnus of Columbus High, Doug has given a great deal of time to the Discoverers. He served the CPS Alumni Association Board for 14 years, including six years as president. He gave 12 years to the CPS Foundation Board of Directors and 10 years to the Columbus High Sports Booster Club, including four years as president. He was recognized with the CPS School Bell Award in 2011.

Doug has given his time across the community. He is currently chair of the Platte County Visitors Committee. He has served the TeamMates Mentoring Program in Columbus. He has volunteered his time for local Special Olympics and the St. Bonaventure Godparent program. He has coached Columbus kids in baseball, midget football and basketball.

Doug’s service has been recognized by the Platte County 4-H program with the Friends of 4-H Award. He was given the Service to Mankind Award by the Columbus Sertoma Club in 2012.

Congratulations to these three on the well-deserved recognition they will receive at the banquet on November 21.

As I mentioned last week, the Business Hall of Fame will induct Charles Wurdeman, Bob Loshbaugh and Marie Froemel that same evening. I hope you’ll be able to join us in honoring all these families.